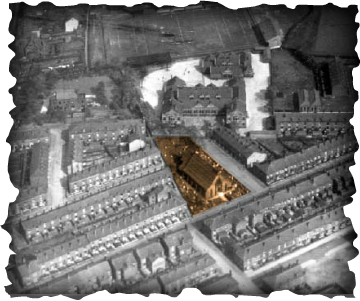 1800
Until the later part of the 18th century, Hyde was a remote hamlet, part of the sprawling parish of Stockport. The few inhabitants had to go there for baptisms, weddings, funerals etc.  While it was so small a place, this did not really matter, but with the coming of industry to this region, where coal and water power were plentiful, things began to alter.


1811
According to the census of 1811, Hyde at that date consisted of 290 houses containing 317 families. Of these families, 11 were employed in agriculture and 302 in trade, the total population being 1,806.  Approximately 6 people per house in a two up two down. This refers to the township of Hyde only, not to such places as Godley, Newton and Hattersley, which were, at that time, part of the parish of Mottram.


1817
In 1817, Omerod’s History of Cheshire stated that “of late years the increase of collieries and manufactories in the immediate neighbourhood of Hyde has added more to the value of the land than to either the picturesque appearance or the actual comfort of the surrounding district”.

1844
In 1844, the Rev. Charles Prescot, M.A., Rector of Stockport, filled in a form of enquiry for the Ecclesiastical Commissioners with a view to founding a new ecclesiastical district of St. Thomas’, Hyde.

Of these inhabitants, 4,863 were to be in the new district, the remainder to stay in the recently formed parish of St George’s. He described the inhabitants as being “cotton spinners, shopkeepers, innkeepers, the wealthy within the parish are cotton manufacturers, and with one or two exceptions these are deadly enemies to the church”. In response to the query about a suitable building being available he wrote – “there is a building originally intended for a Mechanic’s Institute, in which Chartists, Socialists and other Seditious, irreligious and unprincipled men were in the habit of meeting”.

The building in question is the old St. Thomas’ school.  The Chartists had used it for drilling and storing arms. The rector’s attitude to the aspirations of the working men was typical of the clergy of his day. It partly explains why the industrial working classes were never great church-goers.

1846
The ecclesiastical district of St. Thomas’ was founded by an Order in Council dated August 27th , 1846. The first vicar, the Rev. A. Read was appointed by the crown on October 9 th of the same year. The patronage was vested in the Crown and the Bishop alternately.

1868
Since the parishioners were almost all working class people with low incomes, it was not until 1868 that St. Thomas’ church was built at a cost of £3,000. Owing to lack of money, the original plan providing for north and south transepts had to be dropped. This was certainly a blessing in disguise. The foundation stone was laid by the Rt. Hon. the Lord de Tabley, possibly George Fleming Warren, 2nd Baron de Tabley (28 October 1811 – 19 October 1887)
The freemasons of Hyde attended and assisted at the ceremony. The church was consecrated on Wednesday, September 23 rd 1868.

1875
St. Andrew’s Mission Church was built on John Street in 1875. It was originally intended to form a separate parish in that part of the town, but this scheme fell through.