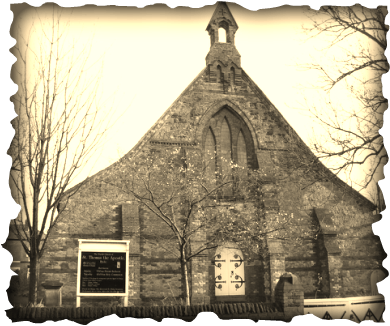 The Church of St.Thomas the Apostle, Hyde was built in 1868

The Architect, Medland Taylor was a Manchester architect who produced a number of fine if quirkish buildings. Locally, he designed St. Anne’s, Denton, St. Mary’s, Haughton Green, Holy Trinity, Hyde and the Library and the Post Office in Stalybridge. The addition to the chancel and transepts at St. Lawrence’s, Denton is also Medland’s work. At the time when many architects were designing churches in a style they believed to be a copy of Gothic Architecture, Medland was producing an inventive mixture of architectural styles and motifs. For example, St. Thomas’ has brick buttresses and window surrounds with stone infilling. Most would have followed the convention and used stone with brick infilling. The roof is an example of his humour, according to Pevsner, which has a quirky additional pitch to it. The proportions of the church are such that St. Thomas’ appears to be quite a small building, whereas it is fairly large. The William Morris windows are the Church’s glory. Morris and Co is the most commonly used title of the firm which William Morris founded in 1861 which continued in business until 1940 and for which Edward Burne-Jones was the principal, but by no means the only designer for stained glass. The firm went into liquidation in 1940 and Duncan Dearle acquired the right to use the firm’s large stock of designs.
Powered by